The State of Racial Discourse in China

The State of Racial Discourse in China focused on attempting to assess the mainstream understanding of race and racial identity within China and reflecting on how the gaps between American and Chinese perceptions of these issues may continue to impact how Beijing is viewed abroad.

Panelists analyzed contemporary examples of discrimination and racism in China–particularly those against Black peoples– in order to explore how such incidents have affected perceptions of China within the US and on a broader scale.

This was the third and final session in a three-part series titled The Black American Identity in China. It was hosted by NABEA and Black China Caucus. 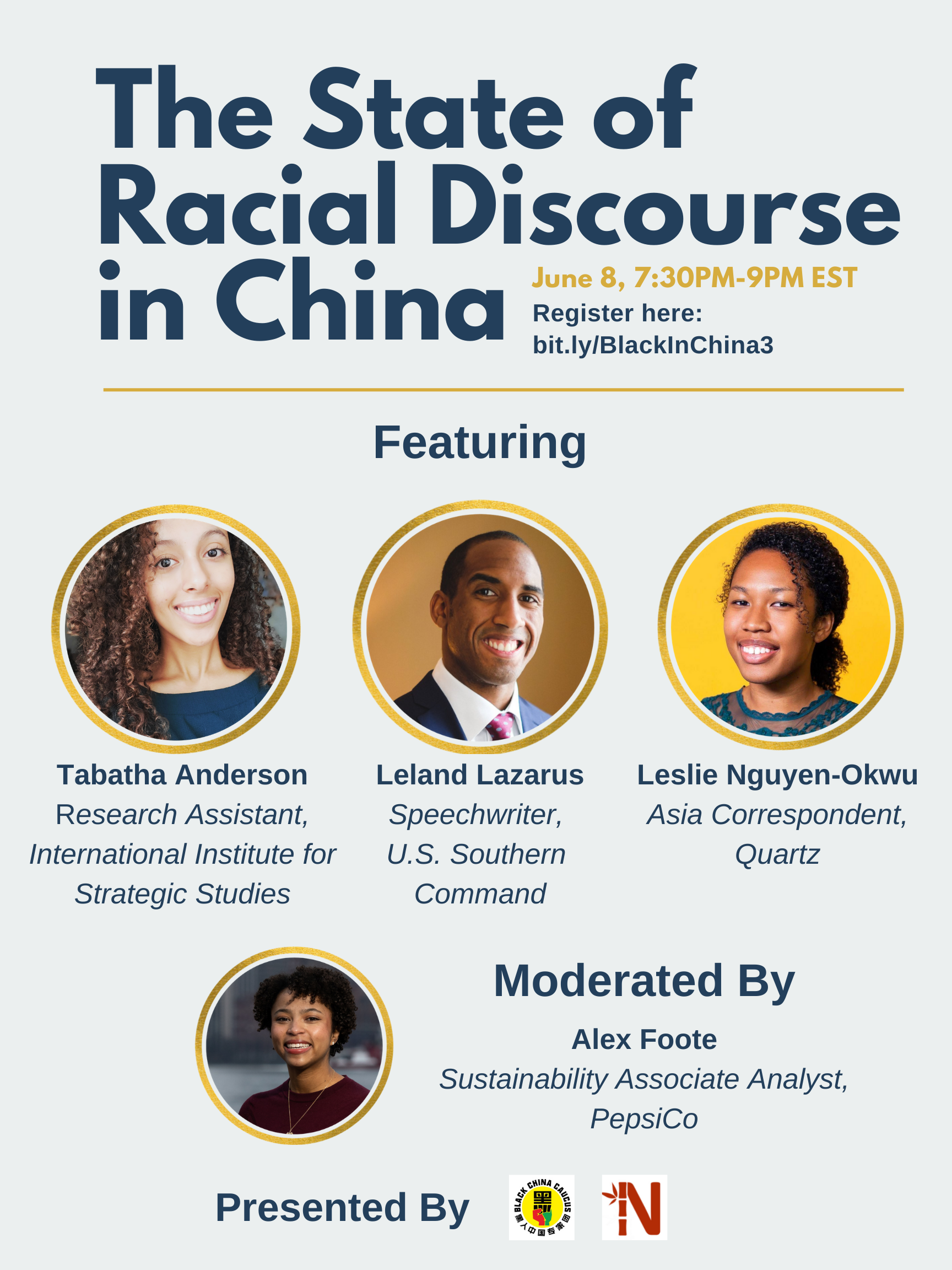 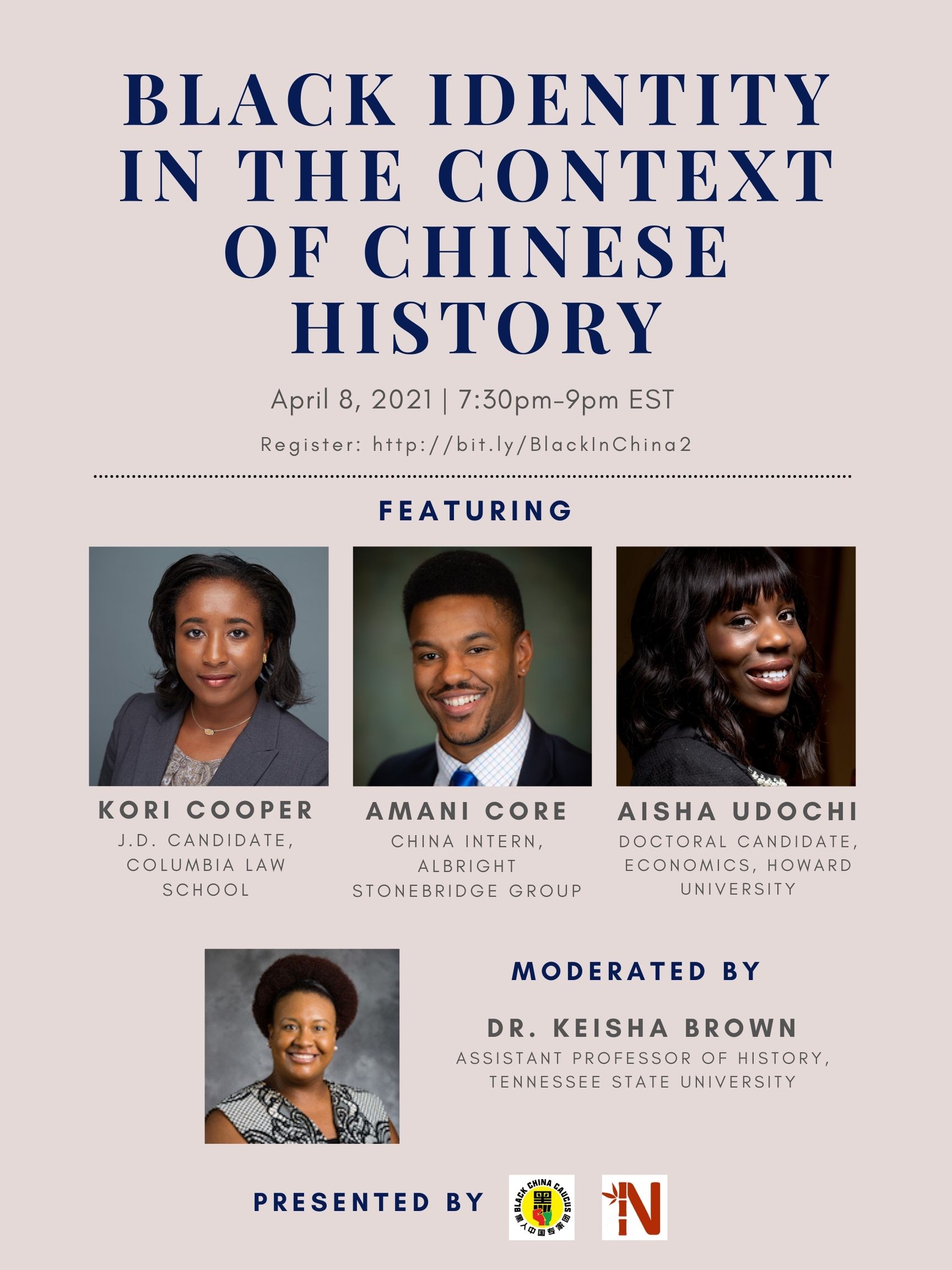 Black Identity in the Context of Chinese History

What is China’s exposure to Black people and how is race handled in China today? What are popular misconceptions and how did they originate?

Black Identity in the Context of Chinese History explored how China’s culture and history relate to Black identity and the broader understanding of race. Panelists also provided insight into how being in China can shape views of one’s own Black identity.

This was the second session in a three-part series titled The Black American Identity in China. It was hosted by NABEA, Black China Caucus, and supported by Spill Stories.

This conversation with author Karen Hill Anton celebrated the publication of her latest book, The View from Breast Pocket Mountain. The event featured an introduction to the book, Karen reading a book excerpt, and a Q&A session.

The View From Breast Pocket Mountain is a unique and previously untold story, a treasure trove of experiences crossing borders and cultures, creating a life, and finding contentment in a far-off country. To those who’ve ever wondered what their lives would be if they’d taken that road without a map, this is the book you need to read. The book gives us a glimpse of a life not designed or even imagined. The book won the Book Readers Appreciation Group (B.R.A.G.) Medallion. To find out more visit: https://www.karenhillanton.com/book 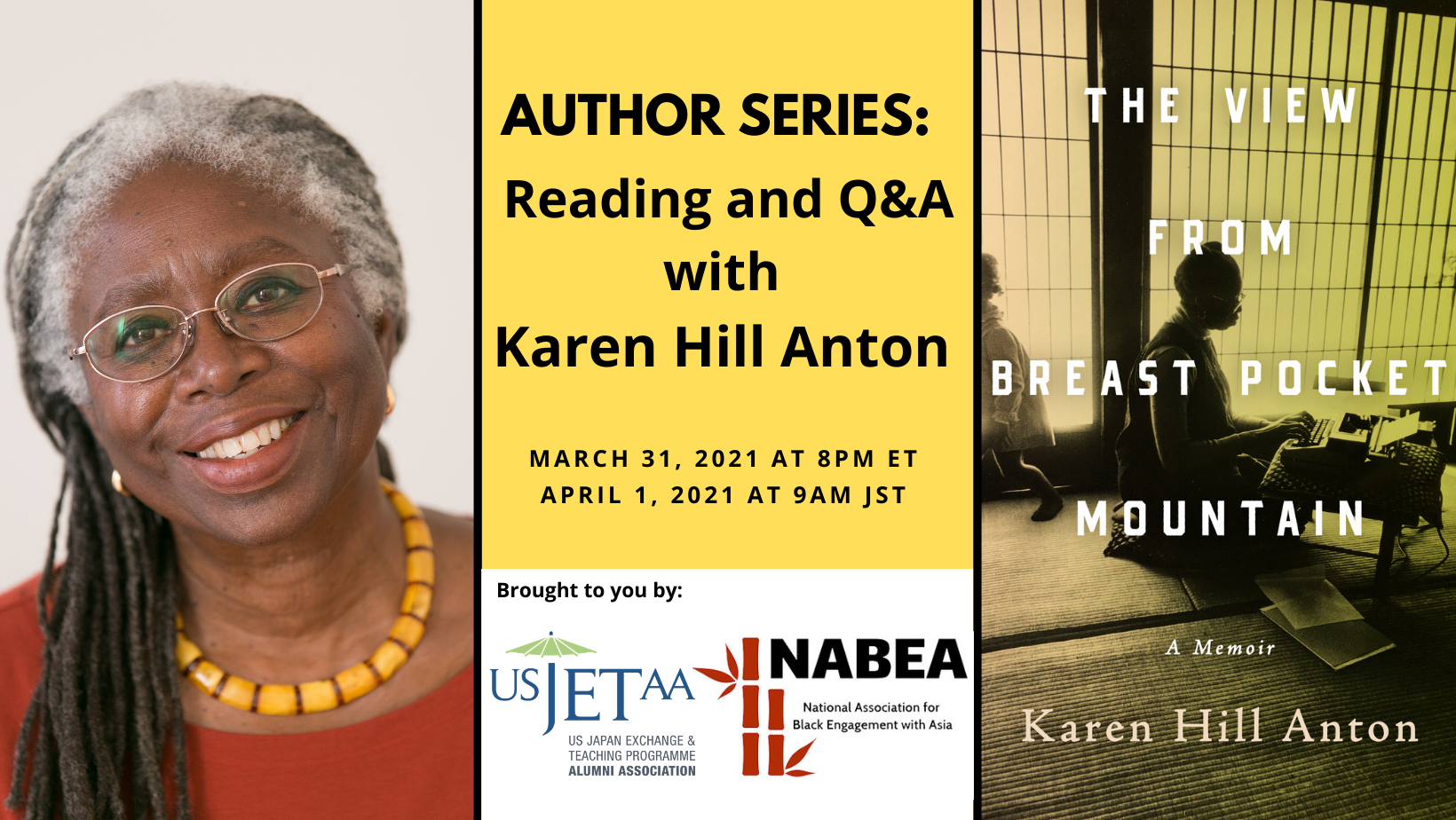 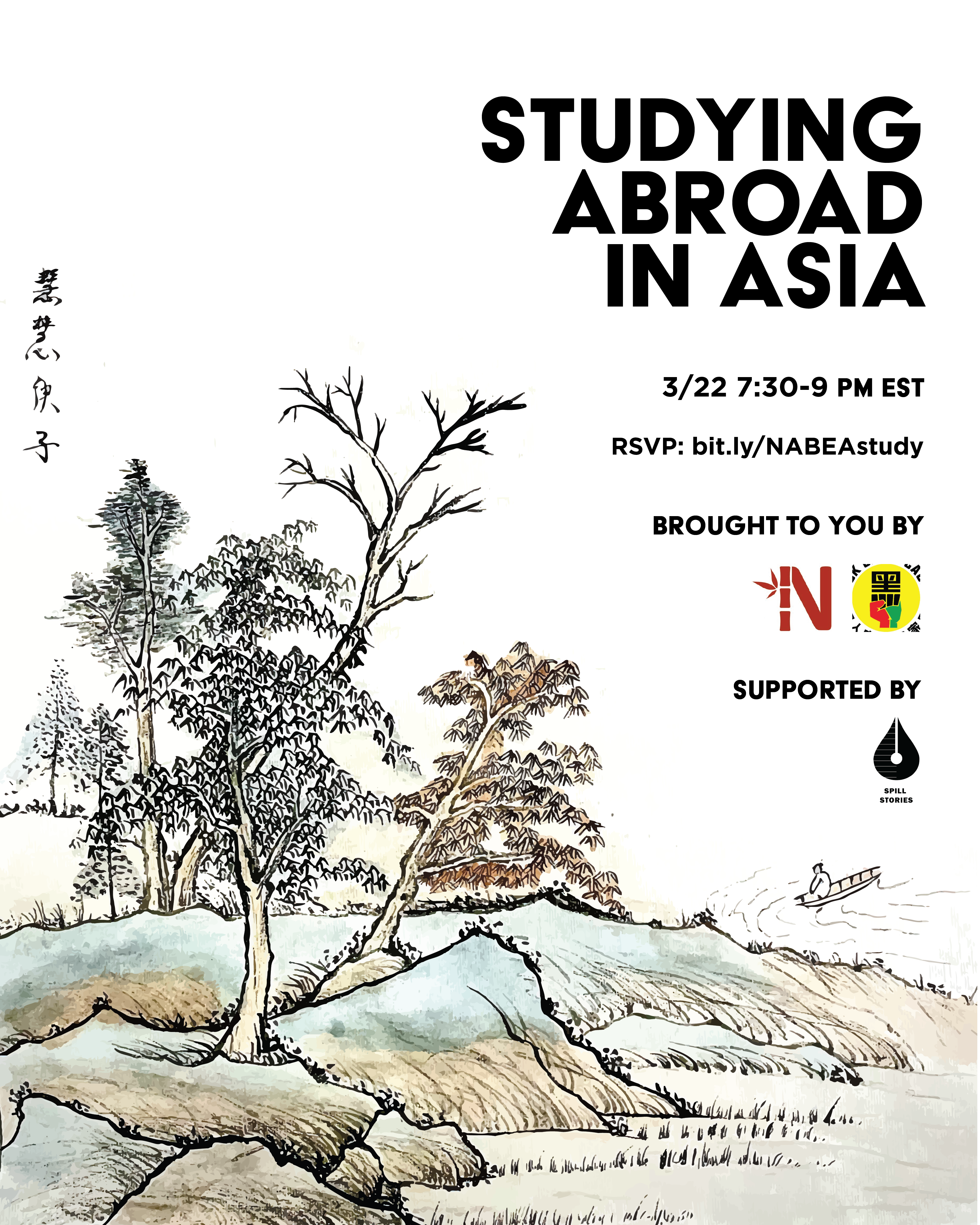 Aimed at current undergraduate and graduate students, Studying Abroad in Asia provided a view into the wide ranging possibilities of studying abroad in Asia. Attendees heard humorous anecdotes about panelists’ experiences living in a variety of countries in Asia and got first-hand insight into the many internship and career opportunities available for those interested in traveling to Asia.

ASEAN in an Era of Great Power Competition

What has been the effect of recent U.S. domestic politics on the U.S.-ASEAN relationship? Where will the relationship go from here given U.S.-China relations?

ASEAN in an Era of Great Power Competition explored the current and future state of ASEAN nations and their relationships with the U.S. during a time of shifting power dynamics.

The event featured Marc Mealy, Senior Vice President for Policy at the US-ASEAN Business Council, and is moderated by Dr. Michael Green, Director of Asian Studies and Chair in Modern and Contemporary Japanese Politics and Foreign Policy at the School of Foreign Service at Georgetown University.

This event was hosted in collaboration with the Georgetown School of Foreign Service. You can find the recording below. 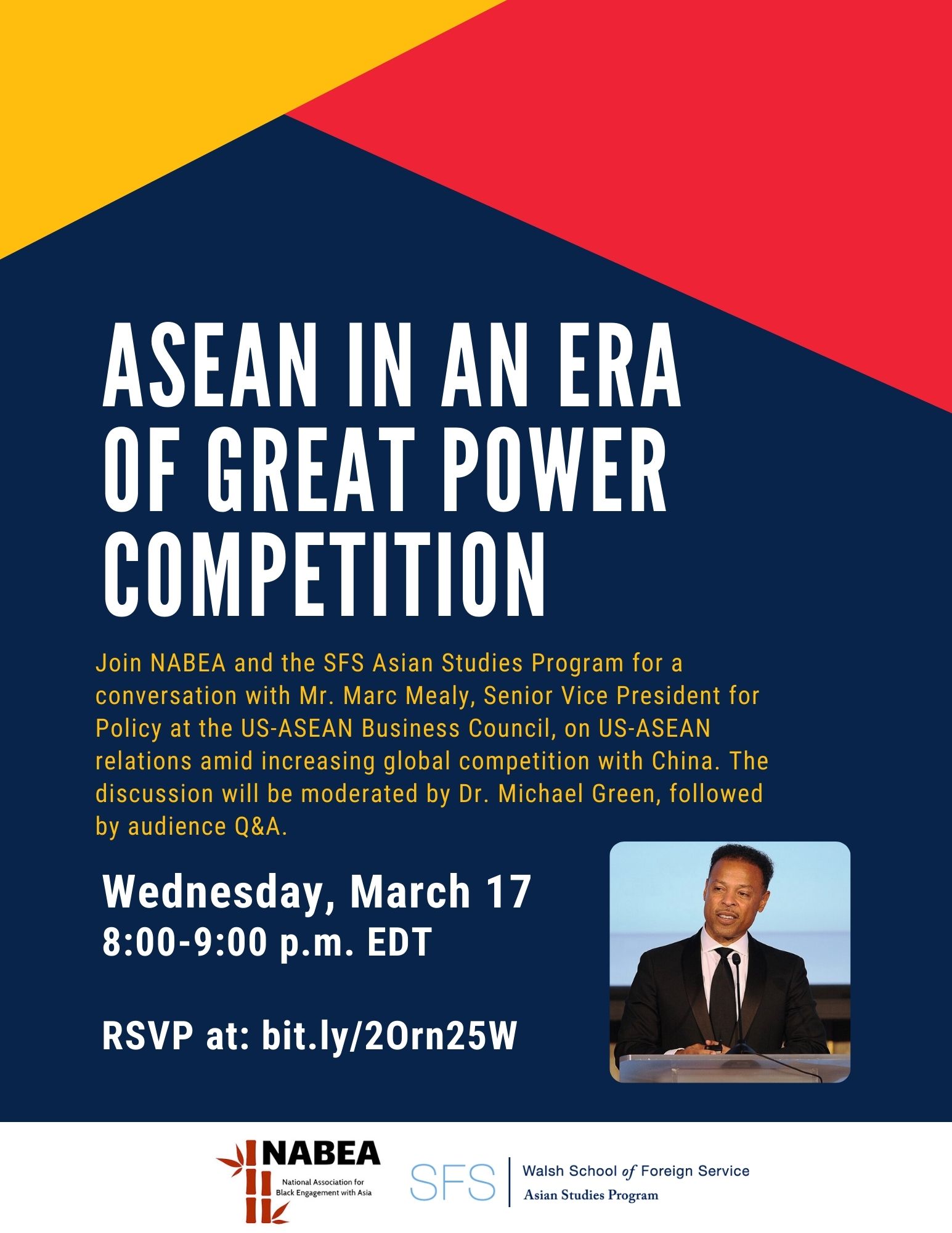 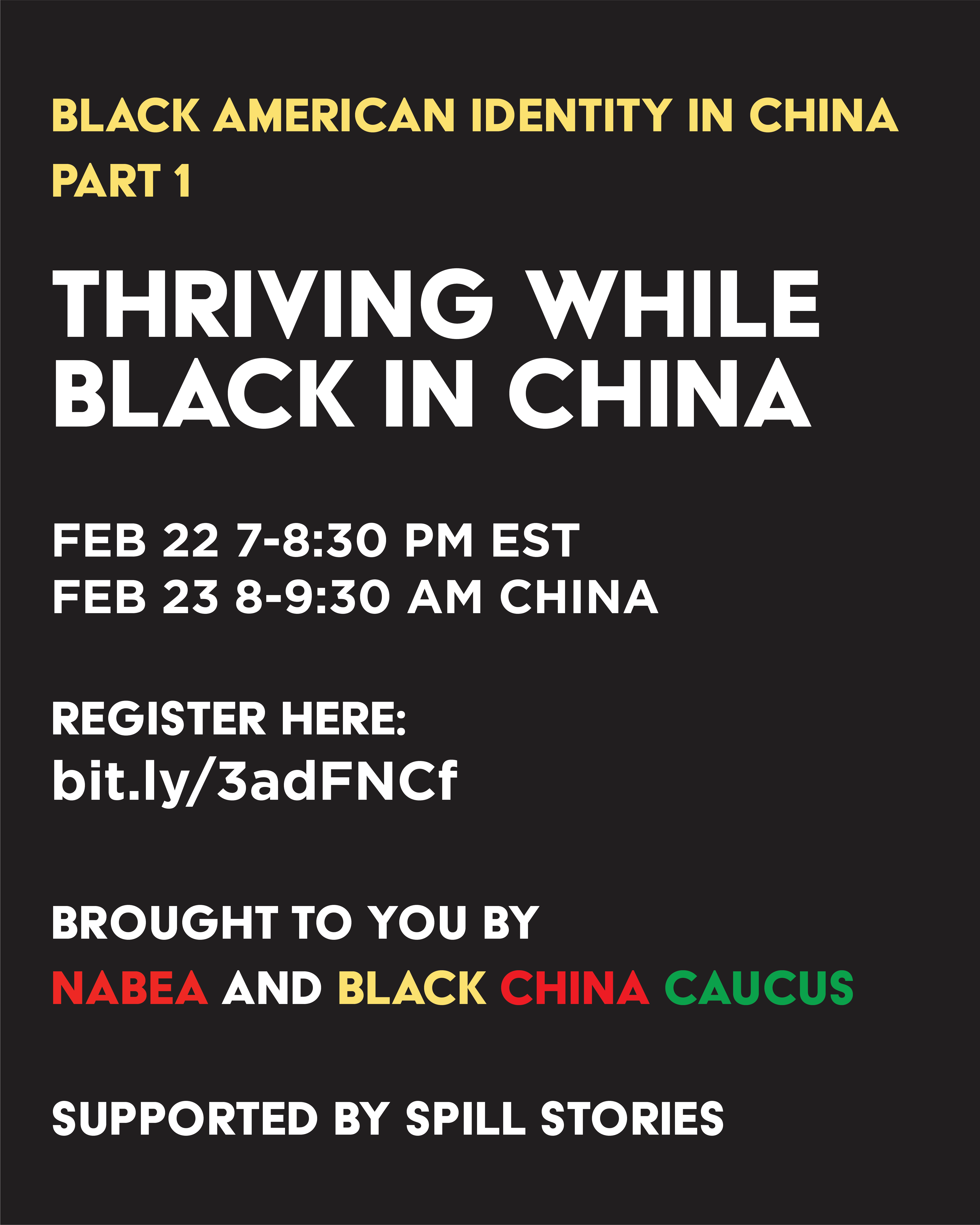 Thriving While Black in China

How does Chinese society society define racial identity? How do you engage with people that do not understand the history of African-Americans, or see yourself in Chinese society?

This was the first session in a three-part series titled The Black American Identity in China. It was hosted by NABEA, Black China Caucus, and supported by Spill Stories.

Careers in Government: Navigating the World of Political Appointments 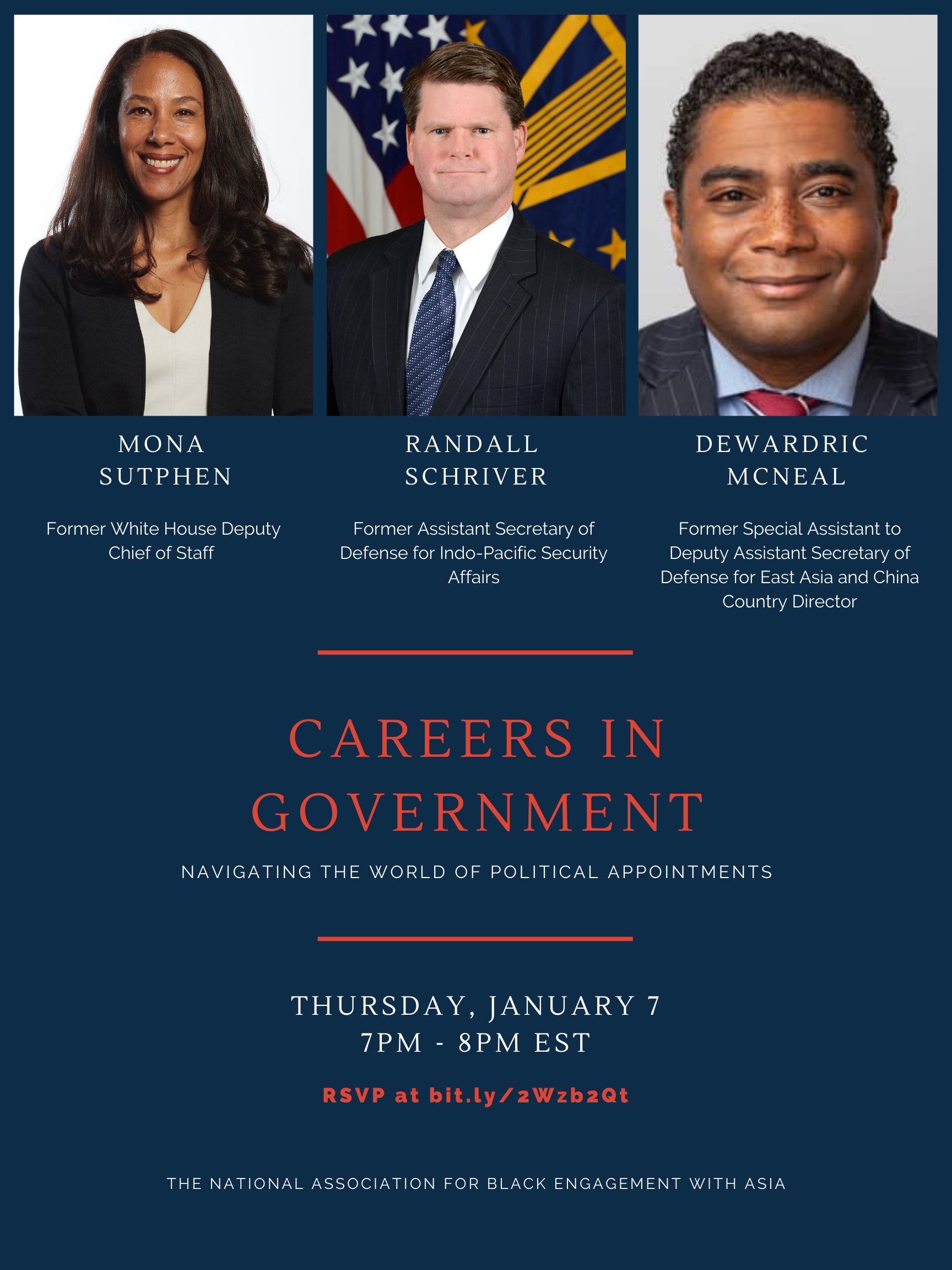 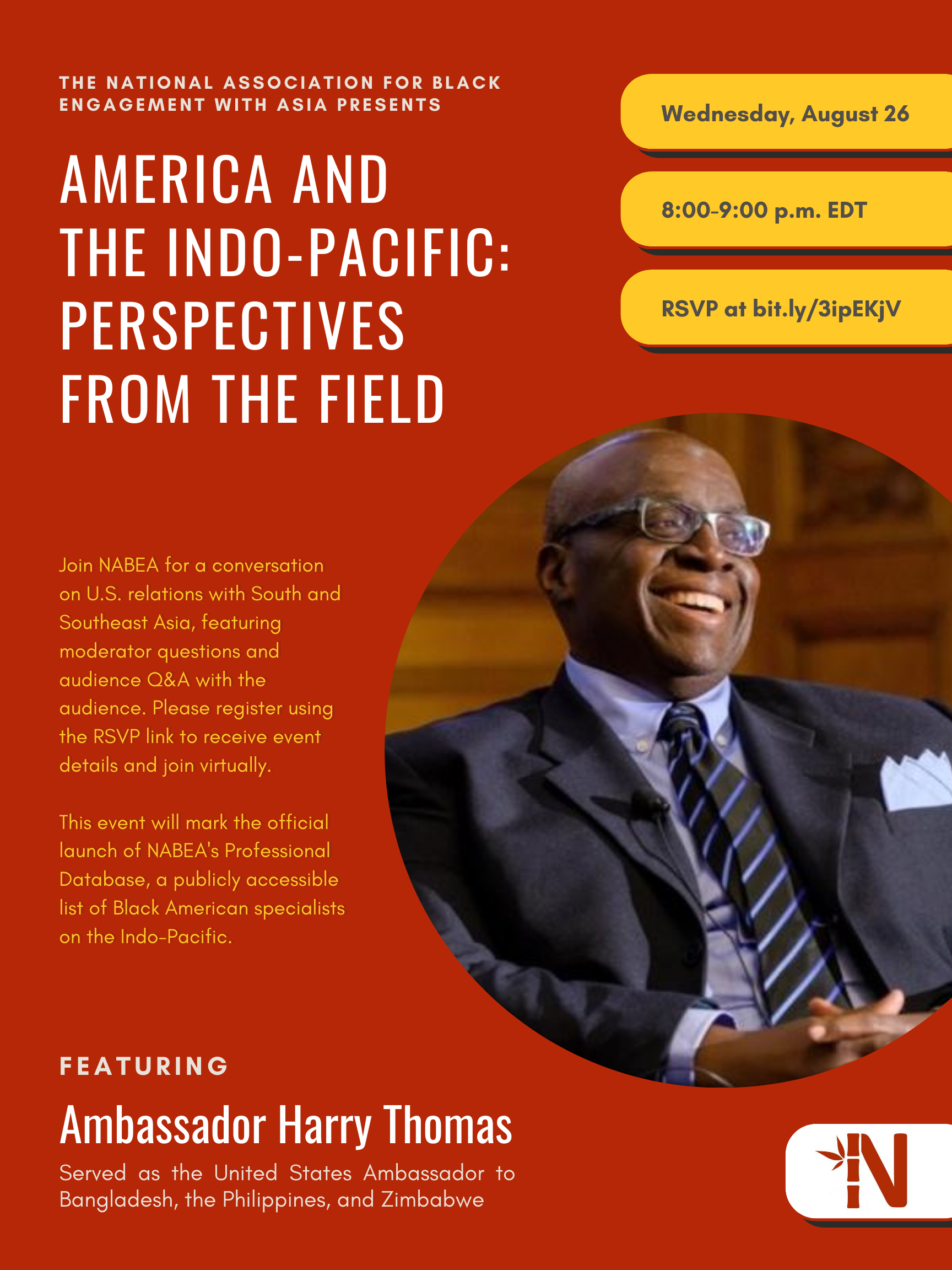 America and the Indo-Pacific: Perspectives from the Field

As Asia continues to move to the forefront of economic, political, and cultural influence in the global landscape, it is increasingly important to ensure underrepresented voices, particularly Black voices, are heard and at the table in U.S.-Asia discourse. Only when historically marginalized voices are included in the conversation can it be said the face of U.S. engagement with Asia is as diverse as the U.S. itself. America and the Indo-Pacific: Perspectives from the Field was a conversation with Ambassador Harry Thomas, one of the United States’ highest-ranking, Black diplomats to the Indo-Pacific, on U.S. relations with the Indo-Pacific–specifically South and Southeast Asia–and his diplomatic career in the region.

The Politics of Who Can Say What and Why: Post-WWII Censorship in Japan

In The Politics of Who Can Say What and Why, NABEA member and Princeton PhD candidate Jessica LeGare lead a roundtable discussion on her work with postwar censorship and literature in Japan, as well as answered questions on how the topic relates to and differs from more recent times. 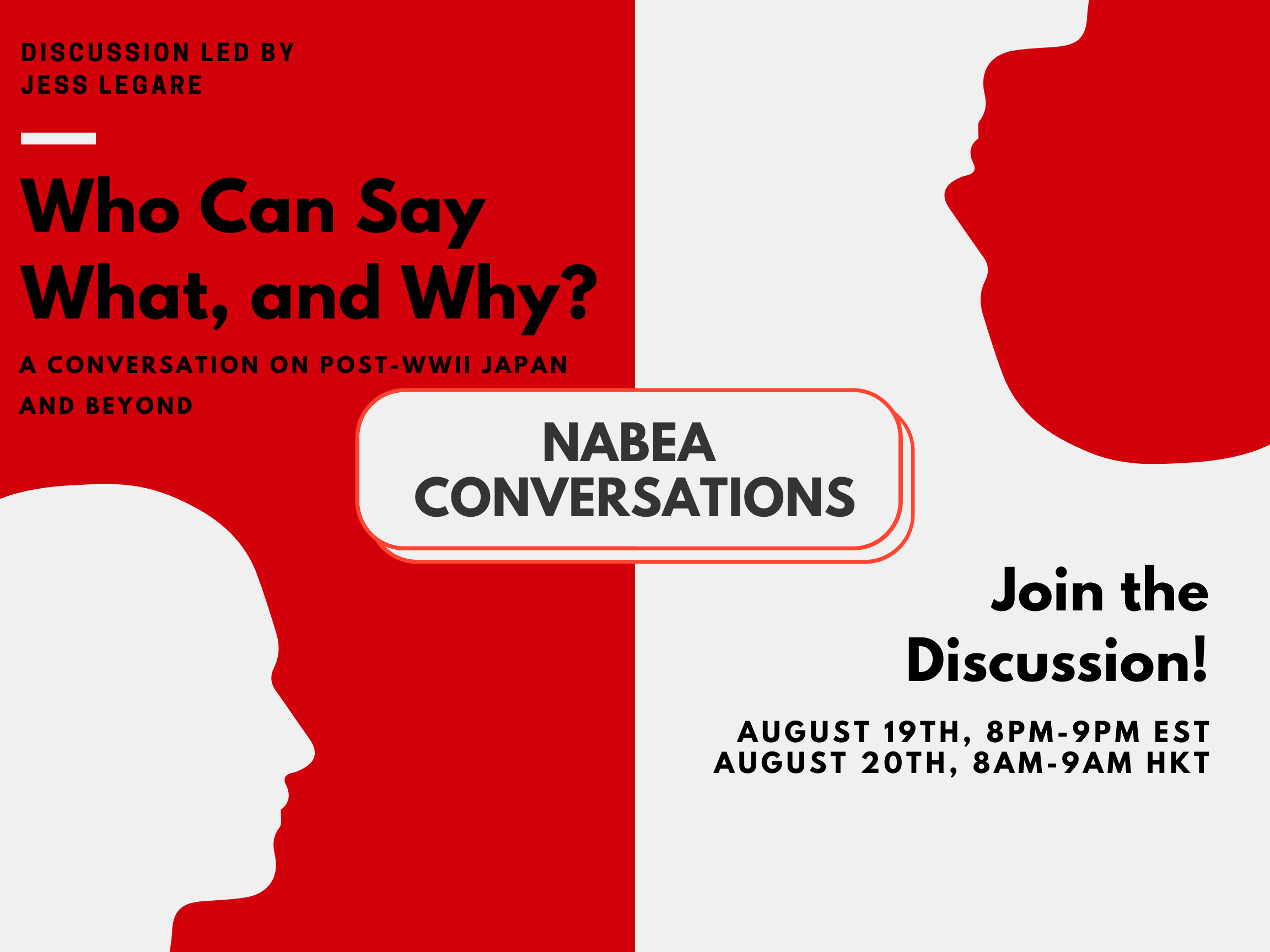 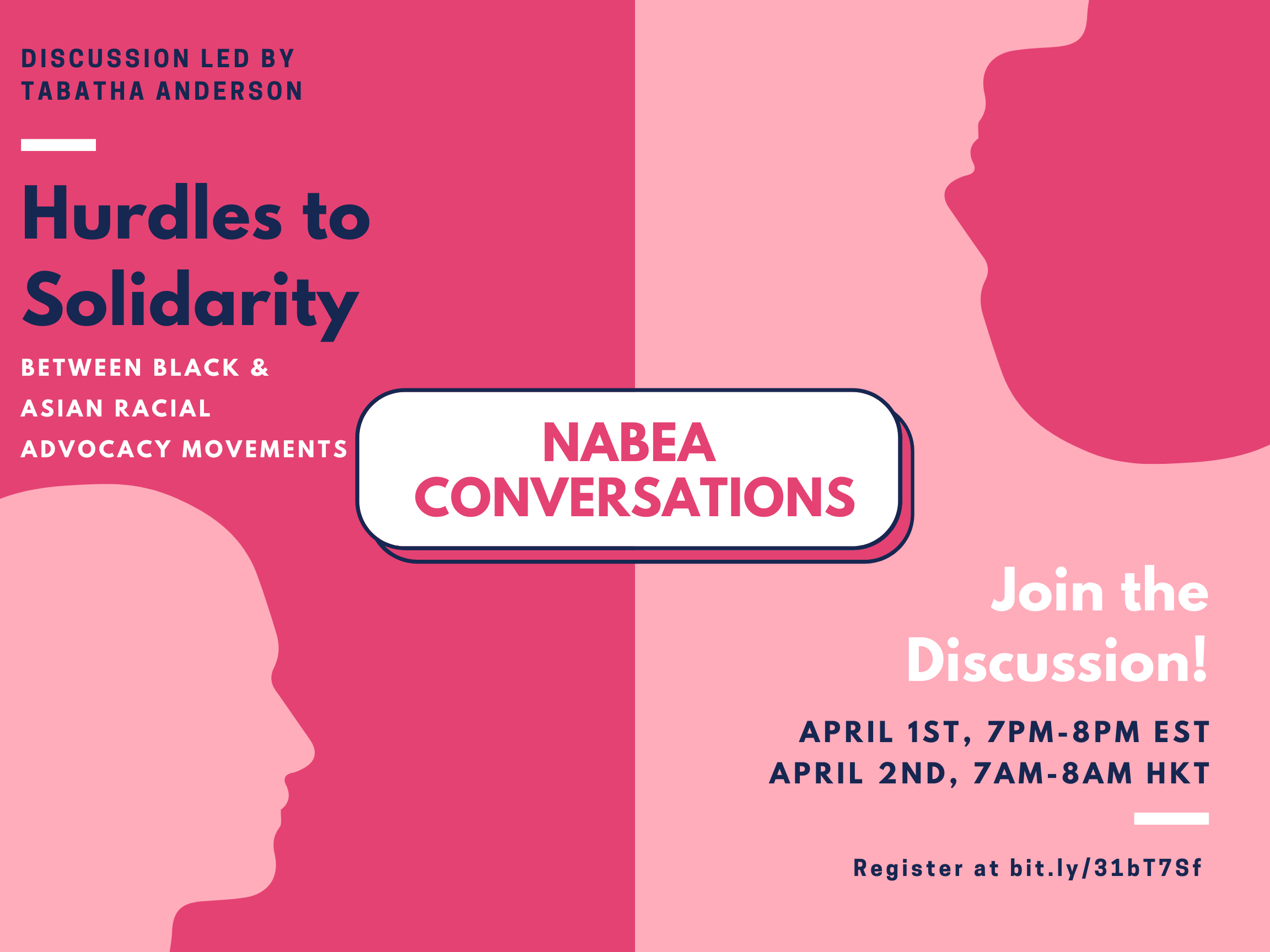 In response to an influx of mainstream attention brought to anti-Asian hate crimes and violence,  Hurdles to Solidarity Between Black & Asian Racial Advocacy Movements was an interactive discussion led by NABEA leadership member Tabatha Anderson on what continues to wedge Black and Asian Americans apart on issues related to racial justice.

In Taiwan in Hindsight: How History Shapes Policy Today, host and NABEA member Shahn Savino led attendees through the important aspects of Taiwanese history, setting the state for a discussion during which members learned from each other about the ways today’s policies on the island have been shaped by past events. This was the second event in the NABEA Conversations series. 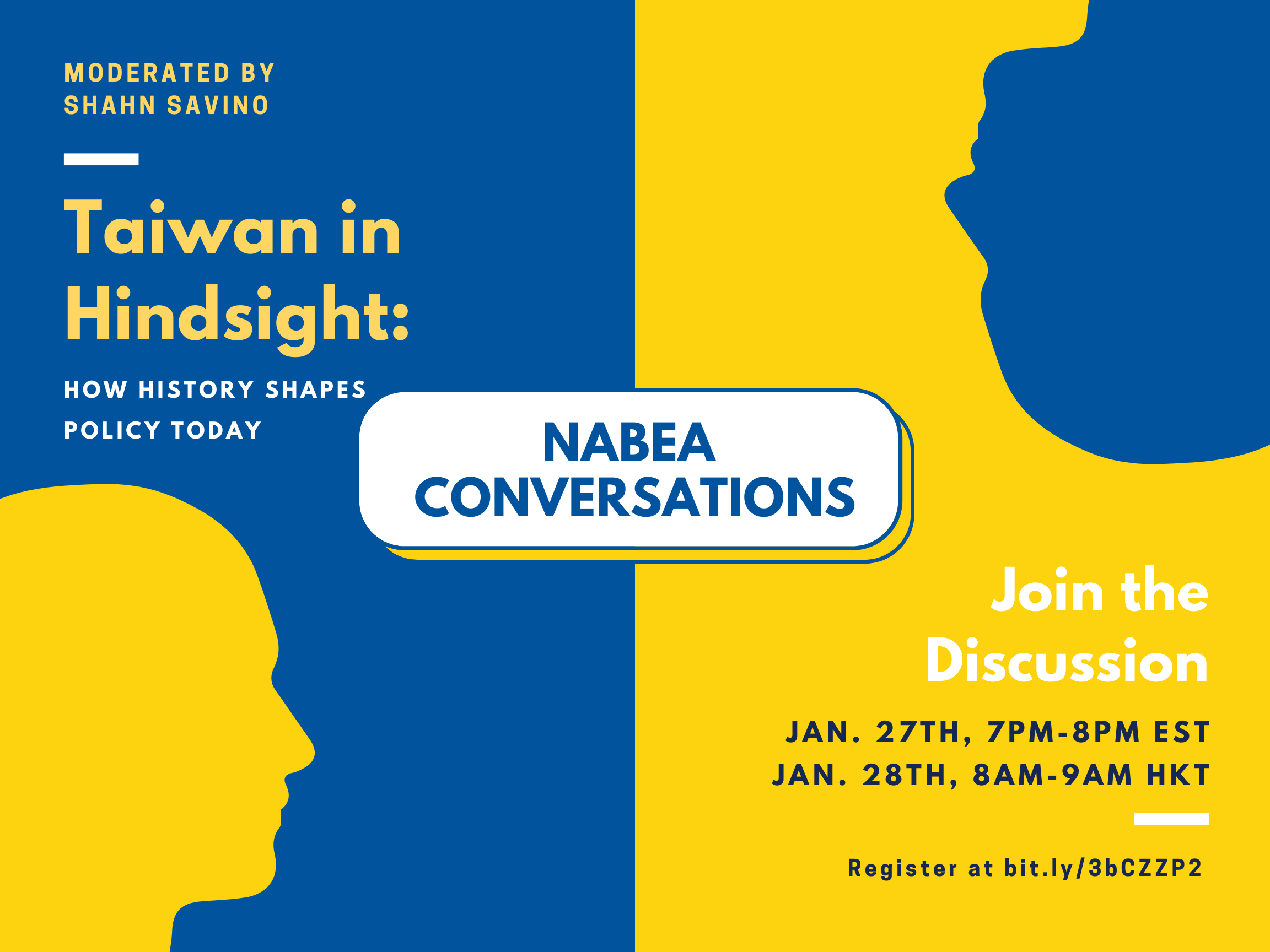 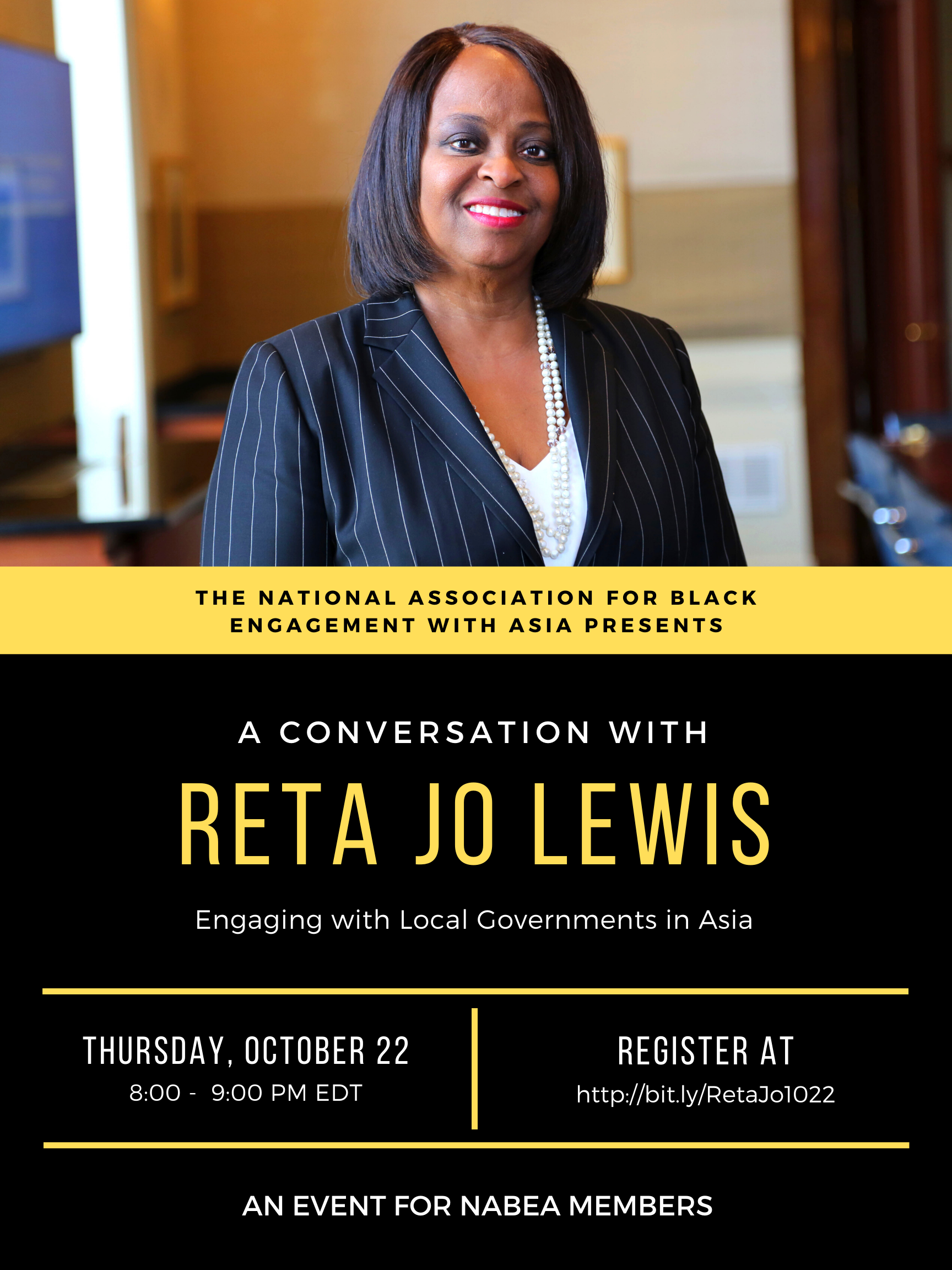 Engaging with Local Governments in Asia

Working in Japan: How to Start and What to Expect

Many of NABEA’s members are interested in working in Japan or have experience working in the country. During Working in Japan: How to Start and What to Expect, host and NABEA member, Stephen Chance, shared insightful information and led an informative discussion about Japanese working culture, Japanese language requirements for work, and different pathways to take advantage of to work in a variety of fields in Japan. This was the first event in a new internal series called NABEA Conversations, which take the form of topical discussions and conversations led by members of the NABEA community. 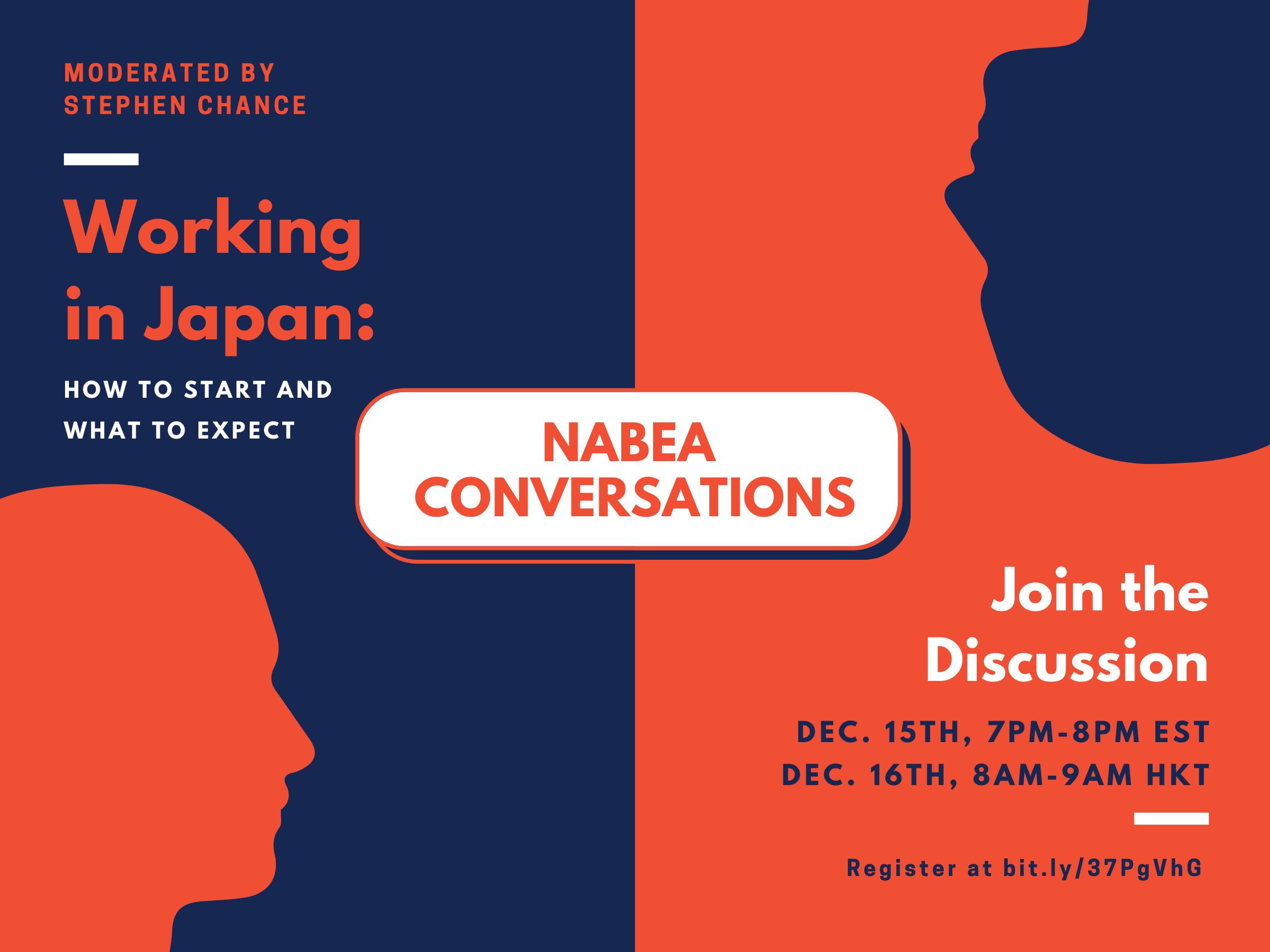 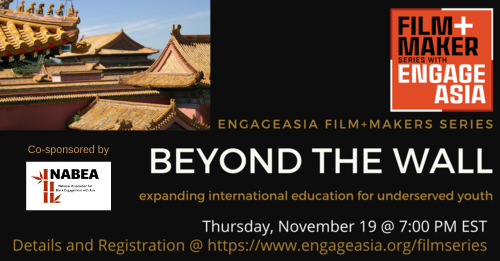 Beyond the Wall: Expanding International Education for Underserved Youth

NABEA co-sponsored EngageAsia’s discussion of the film Beyond the Wall, an independent documentary about four DC Public School (DCPS) high school students who were selected for a six-week Chinese language and culture program in Beijing during the summer of 2009. The documentary makes a powerful statement about the value and impact of global exposure and study abroad, particularly for students in underserved schools and communities.